The National Transport Strategy of Ukraine for the period up to 2030, adopted in May 2018, defines the basic solutions aimed at bringing the transport industry to a state that enables ensuring the effective implementation of Ukraine’s European integration course and integration of the national transport network into the Trans-European Transport one.

Actual condition, competitiveness, available prospects for development and the ability to ensure uninterrupted, timely and high-quality cargo handling — these were some of the basic factors in choosing Ukraine as an "anchor" partner to participate in the international project on establishing an international corridor for effective cooperation, which has already connected partners from the Baltic coast to the eastern shores of the Caspian Sea. The U-port group of companies meets these criteria.

Today (on July 9) a memorandum of cooperation was signed between the British-Ukrainian U-port group, represented by the Chairman of the Board Dmytro Zhminko (pictured first from right), coordinator of the Baltic-Black Sea Economic Forum project, represented by the Honorary Consul of the Republic of Lithuania Viktor Popov and the international logistics center Global Multimodal Logistics, represented by Director Volodymyr Makukha. 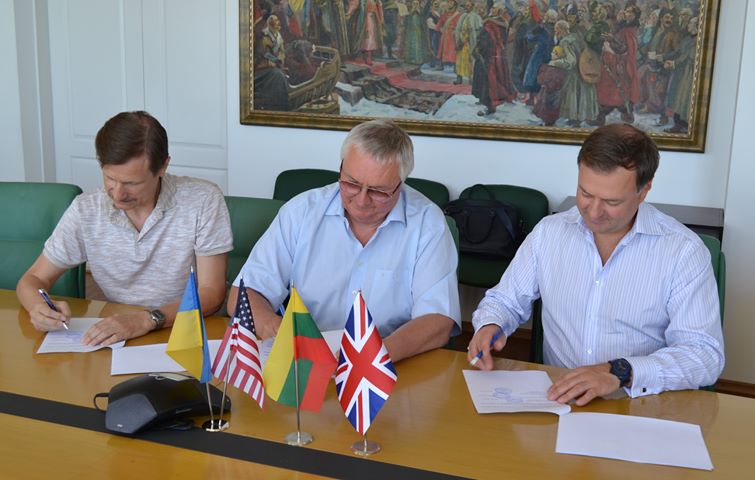 The signing of this document was preceded by the active work of all project partners in discussion about the "Ukrainian segment" in the international Baltic-Black Sea-Caspian project. This is not accidental, given certain problems related to the ability of the transport infrastructure of Ukraine and local transport and logistics market operators to ensure competitive movement of goods between the countries of Asia and the European Union through multimodal corridors.

Undisputed authority of the British-Ukrainian U-port group, high professional level of its employees, almost 30 years of experience in the market, participation (since February of this year) in the project of the British-Ukrainian company Dnipro Cargo Limited, which is part of this group of companies, became an important factor in the fact that the international partner team that formed a transport and logistics chain from the modern seaports of Gdynia (Poland) and Klaipeda (Lithuania) in the Baltic Sea to modern seaports of Kuryk (Kazakhstan) and Turkmenbashi (Turkmenistan) on the eastern shores of the Caspian Sea, has received a partner represented by U-port group who can become not only a reliable link in the international chain but also the foundation for creating new transport and logistics opportunities for Ukraine.

A project of joint use of current opportunities and development of a modern seaport near Ochakov with U-port group is one of consolidating factors for the international partner group.